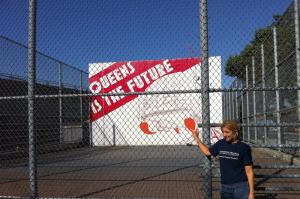 Me on Northern Boulevard in East Elmhurst, Queens.

Queens County is the most diverse county in the country. In jigsaw form, distinct cultural communities; even those that live in enmity back home, frequent each others businesses, marry each other and crave each others food, in a puzzle that is only made whole by the sum of its parts.  Beyond serving as a model for what our ever changing world will look like in terms of racial, religious, ethnic and lifestyle diversity–Queens offers a culinary round-the-world ticket.

Food in Queens is as real as it comes and words like ‘artisan’ or ‘vegan’ or ‘locally grown’ are meaningful descriptions of food traditions brought to this country by immigrants and maintained by generations rather than accoutrements attached to an over-priced, pretentious and utterly boring edible object (you know who you are, Park Slope). Dishes are vegan here because the cultural point of view of the restaurant’s patronage forbids the eating of animal products. Meat is butchered to religious guidelines. Produce is bought fresh because shopper’s grandmothers taught them how to tap a melon in three specific places to know when its ripe.

I used to live in East Elmhurst, a predominantly Hispanic neighborhood where, within a few blocks,  you can get arroz con pollo made eight different styles based on what country the chef came from. Jackson Heights is a short walk from my old neighborhood. A quiet neighborhood of brick co-ops and a unique blend of ethnic groups, 73rd street and 37th avenue are known as “Little India.”Jackson Heights, as well as other parts of Queens, house large  communities of Sri Lankans, Pakistanis, Nepalese, Bengali and Tibetans.

When I used to live nearby, I would go to Jackson Diner; I now live a bit further away in Astoria so I frequent Seva on 34th street and 30th avenue. Indian food is my comfort food.Each spicy bite sweats out the mania and chaos that occasionally accompanies living within 15 miles of 8 million stressed out people. The Indian food tradition is ancient, piquant, smoky, colorful and deeply rich.  Each state within the country has its own traditions and with one billion people to account for, the cuisine deserves lifetimes of study and tomes of praise.

Indians are also known for their confections. Flavored with pistachio, mango, almond and coconut, many are similar in consistency and sweetness to fudge. The mix for gulab jamun; suckeringly sweet balls of fried dough, is readily available for home bakers at the Patel Brothers grocery store in Jackson Heights.

Cookie Chronicles concocted two delicious cookies in honor of India: Garam Masala Spice Cookies and Vegan Cashew Date Cookies. With a heavy and thoroughly hungry heart, I must move on in order to keep to my around-the- world-through-cookies ticket alive. I know you’ll keep me coming back for brightness and inspiration, India.

I moved to Brooklyn for one year after two years in East Elmhurst. After one year in the other borough, I decided to move back to Queens. When I walked down the stairs of the elevated Astoria subway platform to look for apartments over a year ago now, I felt rejoined in mind and spirit. I knew I was home for good in this gritty, mashed up, serene and incredibly delicious borough.