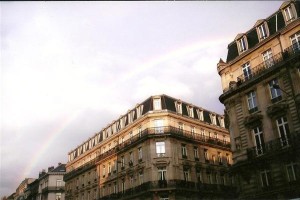 I happened upon a rainbow during my trip to Belgium.

I visited Brussels on a weekend excursion during my semester abroad in Spain in 2006. Against a backdrop of chalky Art Nouveau and Gothic buildings that could’ve used a good power wash, the city is trampled on by the leaders of Europe that blow through on official business like the gray clouds that so often hover over Northern Europe. I was in Brussels on a class trip focused on the European Union (EU) which is headquartered in the city.

The EU is an economic and political system which unites twenty-seven European nations. It is premised on the hope that when countries in Europe are interdependent, the likelihood of the recurrence of war, genocide, poverty and  social control is significantly diminished. The success of the EU is unstable;   assembling a union of twenty-seven nations with distinct cultures, different languages, tense relationships and ancient histories is no easy task–a challenge highlighted by the recent bailout controversies of Spain and Greece.

The front of the European Commission in Brussels, Belgium.

Despite the inherent challenges of the EU, it is recognized by many as a beacon of hope for Europe and a model of cooperative governance for the world, evidenced by its reception of the 2012 Nobel Peace Prize.

Belgium is a densely populated county with a complex history of occupation and colonialism. With three official languages, its current political significance, a high standard of living and a modern and well connected rail system, its a great place to visit if you happen to be in Northern Europe. My trip there was also highlighted by side trips for chocolates, a canal boat ride and church gazing in Bruges and Ghent. I also ate some really good food; Belgian blonde beer, moules-frites, waffles and some very silky chocolate. 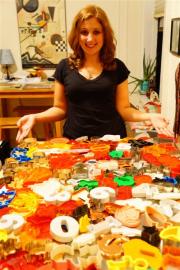